Lager? IPA? Dark Ale? Is everything clear as it seems to be? 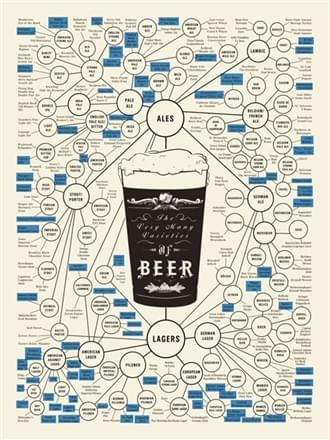 The most immediate and instinctive classification of beers is definitely based on the color - blonde, red, brown - in the second instance on the basis of alcohol, but the most correct classification  is the one based on  the type of yeast and on the type of fermentation.

This classification allows to split the beer into 3 large families, which  are divided into many sub-families.

ALE: are grouped under this name those beers fermented at high temperatures, between 18° and 20°. The yeasts are the Saccharomyces cerevisiae ones.

LAGER: the beers that go under this name are produced by Saccharomyces carlsbergensis yeasts and make a fermentation process at much lower temperatures, around 5°-6°. These beers have range of flavors that goes from sweet to bitter and a chromaticity range from light to dark. Most of the Lager beers are pale or of an intermediate color, with a high carbonation, hop flavor from medium to high, and alcohol content of 3-5% by volume. This  method of brewing was widespread in the past and it is still used in the industrial process as it ensures the beer greater stability and repeatability.

LAMBIC: they are the spontaneously fermented beers, certainly the oldest beers in the world, with unique characteristics. Thanks to the bacteria present in the air, the sugars are converted into alcohol spontaneously without the addition of yeast. These beers, that follow this ancient rules, are produced only in a small area in southern Belgium: they are characterized by a typical sour aftertaste that can be mitigated by the addition of sugars or syrups. 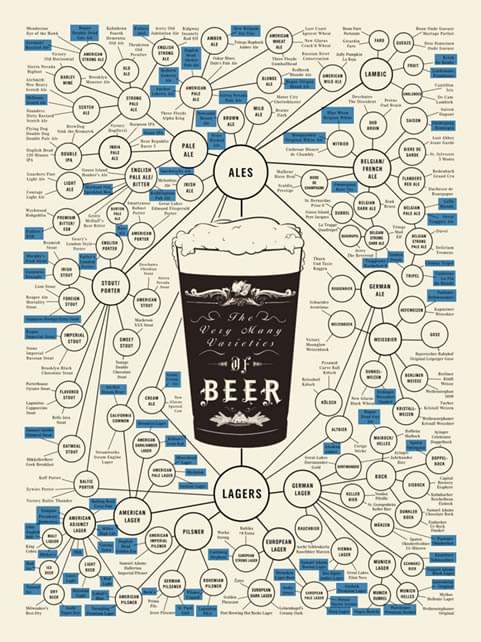 The sub-families are very numerous and differ according to the different yeasts, grains, hops or malts used.

In the family of ALE we can remember the IPA, Indian Pale Ale: malts, hops and yeast are British and the beers have fruity and herbaceous aromas, medium body and they are characterized by a bitterness well balanced by the sweetness of the malts used. Close relatives of the IPA are the American Pale Ale which differ by a higher alcohol content and more pronounced bitterness.

The Belgian Ales are different from the English Pale Ale for the strong presence of spicy, fruity notes and the characteristic coppery color; the palate is  softer, round and warm.

The Dark Ales, the typical British ales, are divided into two categories Stout and Porter, both synonyms of dark and strong beers, characterized by a "toasted " flavor, similar to coffee, due to roasted barley and wheat used in their production.

Among the Ales there are also the widespread Wheat Beer or Weissbier, the light-colored and turbid malted classic beer made of wheat.

The Pilsener, or Pils,  is the most famous beer among the Lager ones: it is  the typical Bavarian beer, born in the first half of the nineteenth century in the areas around the river Plzen, hence the name, and characterized by light color, almost golden and a sweetness due to the characteristics of the water used.

At the industry level is definitely the most produced and consumed beer.

Next to the Pilsener, in Bavaria, there is the widespread Oktoberfestbier, a lager with an amber color and a strong malt  component, produced in spring and consumed in the traditional beer festival in Monaco: the wellknown Oktoberfest.

There is not a real regulation for the different styles of beer produced in the world and neither a rigid classification of belonging to one of the three main families: the producers of craft beers know it very well. Infact every master brewer creates, tests, tries to find a nice balance between the various components of beer without forgetting the typical bitterness of the beer, the only parameter that can be measured according to the scale IBU (International bitterness Units )

Which kind of beer do you go for?